My family owned a 40 acre farm at the corner of 170th and Baseline in Beaverton, Oregon for almost 90 years. In that time we sold everything from turkeys to corn to tulips. Three generations of our family grew up there chasing pheasants, raising animals and shelling peas. Our people were born and have died in that house. The barn that stood at the farm is, to many, a natural masterpiece.

In the 1962 Columbus Day storm the wind blew so hard that barn was irreparably damaged.  It was known by our neighbors as “the barn with the big sag in the middle”. Every year gravity pulled it slightly lower, and lower to the ground. In its last year the only parts still standing were the two end walls. Although once considered a tragedy to our family, the destruction of the barn had become a source of conversation and wonder to nearly everyone in our community. Artists would stop to photograph or paint it for entry in the state fair, publishers of “old barn” books include it in their volumes, people would measure it in their minds against last year’s pitch and postulate how much longer it would remain standing.Were there animals that lived in there?  What was it used for “back in the day”?  Did it still have owls living in the old broken down rafters? 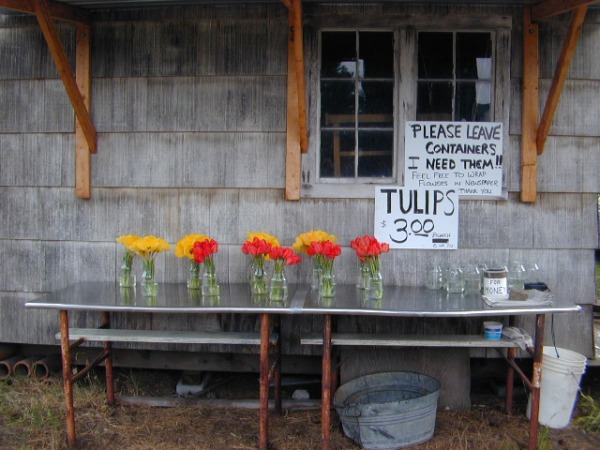 Many years ago now, we were approached by Tri-Met to sell a portion of our 40 acres to allow passage of the MAX train to Hillsboro. Their offer was for only 26 of the 40 acres so we gracefully declined. After several months of negotiation we were told that we could either sell the land or have it taken from us.  The grandparents were getting older and it was getting increasingly difficult for them to maintain their farm lifestyle so with some reservation, they accepted the offer.  We watched them pave over our corn field and move Baseline Road so that it covered our old home site and baseball field. An adjacent two and a half acre parcel was sold shortly thereafter so that rows of apartments could be erected. Still, on the remaining three and a half acres, we grew our vegetables, had our Fourth of July barbeques and sold our flowers all while the MAX bells rang at nearby Elmonica Station. 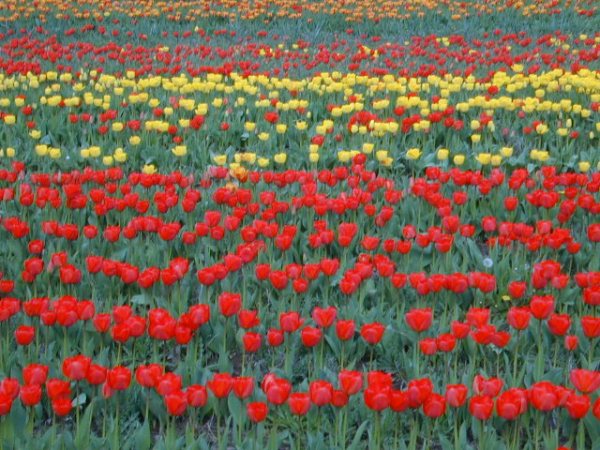 Eventually, we found a buyer for the last piece of our little farm on Baseline Road. Condos and coffee shops were built, acres of fertile fields because vast parking lots. We finished up the last growing season, collected whatever tools and treasures we could, and said our goodbyes. Our farm meant many things to us, but to our friends, neighbors and customers, we were the place where you could get a dozen freshly picked tulips or daffodils or Jubilee corn cobs for $3.  We were the seemingly unattended farmstand with the hand-penned sign, and the coffee can that magically replenished itself when no one was looking. HONK FOR SERVICE.

Artists came in droves to snap a few last shots of the old barn before it went. Most of them ignored the “No Trespassing” signs, but who can blame them? They wanted to remember that farm as vividly and fondly as we do. It was the place with the little old man who shuffled around all day, and the kids who wrapped your flowers in newsprint, dispensing advice on which bunch of daffys or peonies would look best on your kitchen table. The tulip farm at Elmonica Station.

Now, some 15 years later, I still feel pangs of sorrow when I think about our family farm.  But that place and everything we learned there goes with us wherever we live.  Some of us still have descendants of those big red bulbs in our yards today to remind us of Grandpa Howard.  He taught us how to plant and pick them, dig them up and divide the bulbs, clean and share their beauty with the people around us.  When my kids pick handfuls of the daffodils and grape hyacinths in our yard and we carefully place them in my grandmother’s bud vases – the same vases that held the spring flower treasures I brought her – I honor Grandma Ellen and those spring days we all spent together at the farm. All of those memories remind me to celebrate the beginning of a new season.  Happy Spring, everyone.